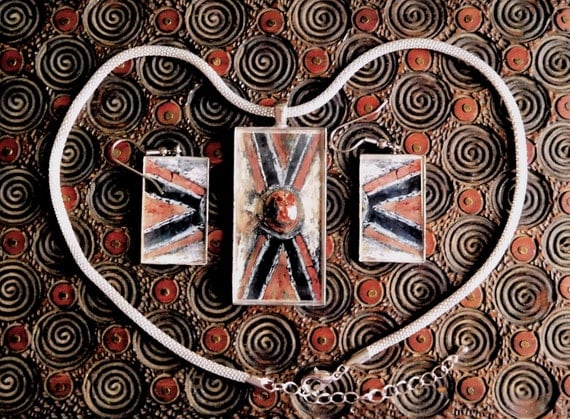 Amazingly modern in their graphic design, primitive tribal shield patterns have clearly influenced modern art.  That is why I love working with them in designing.

The necklace set above is made using pieced images of an early aboriginal warrior shield from New Guinea. The pendant is embellished with a large leopardskin jasper cabachon.

For more detail, view this set in my shop, Serra Craft

Here is a photograph of the original shield.

From Africa, I used a pattern from a Zulu tribal shield for the necklace set from my shop seen below: 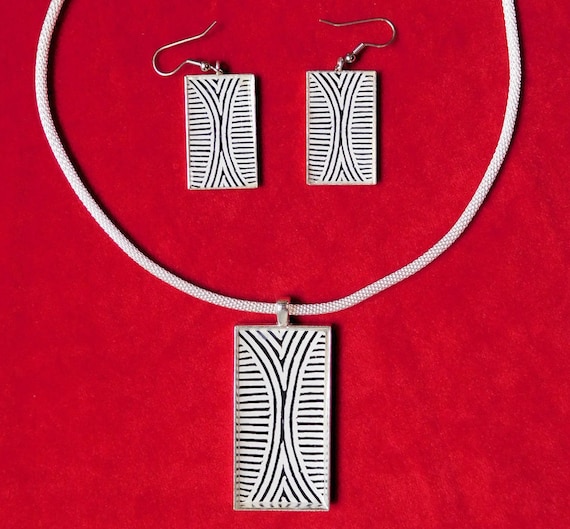 For more inspiring African and tribal design and decor images visit my Pinterest board, African and Tribal Influences .

One of my all time favorite switchplate creations is Spenser’s Berserker [above]. It is composed of 2 images with corner squares of snowflake obsidian chips. The border motif is a detail from an illustration of a craftsman turning chess pieces, found in the “Book of Games,” Circa 1280 A.D..

The main image is of “the Berserker”, one of the ancient Lewis Chessmen.

The Lewis chessmen are a group of 12th-century chess pieces carved in walrus ivory, discovered in 1831 on the Isle of Lewis in the Outer Hebrides, Scotland. They are believed to be Norse in origin – left there by the Vikings around 1200 AD.

The photo above is from the collection in the British Museum.

What I love about these chess pieces is how their personalities and primal angst are so clearly read on their faces. The Berserker [the rook, in a modern set] is so tense he’s chewing on his shield! The Queen [blue background] and the King [shown back and front] are shown above.

My light switch plate is named Spencer’s Berserker for my favorite U.S. chess master, Spencer Finegold, who inspired the piece.

You can see Spencer’s Berserker at my shop, Serra Craft.

The Lewis Chess Set’s history is full of intrigue and amazing facts. To read more about these amazing chess pieces, use this link.

The images used to create this light switch plate come from a 19th Century Ethiopian Healing or Magic Scroll.

For more about the fascinating history of Ethiopian Healing Scrolls, and to explore the beautiful graphic designs of the scrolls, visit the Metropolitan Museum of Art’s Heilbrunn Timeline of Art History . And to see more views of this switchplate visit my shop, Serra Craft .

Stan Miller has a great video on YouTube on painting portraits.  In a very refreshing change from x + y + z = s[kintone]  color formulas in so many watercolor instruction books, Stan Miller focuses on value, not color, in his approach. This is a must see [and must try] video…. because sometimes what we all need is a fresh perspective.

Zimou Tan’s YouTube video is a joy to watch. It’s a completely talk free format. Starting with the blank watercolor paper and some great baroque music, you get a ‘voyeur’s’ eye view of the evolution of the painting process from start to finish. And there’s something clarifying and focusing about what baroque music does in the brain…. [Somebody has to have studied this…  I know it always helps me to get in the moment when doing calligraphy.] Anyway, by the middle of the short video I felt I was watching Zimou Tan’s thought process through his hand as he painted. Great video! Give it a view!

Here’s a light switch plate with an intriguing backstory….

…a light switch plate with an intriguing backstory.

The Belle Epoch Peacock Switchplate is designed with an image of a placed fabric detail from an amazing piece of embroidered fabric. Abstractly beautiful in its own right, this fabric comes with a history…

Photo above: gown on display at the historic Curzon family house, Kedleston Hall in Derby, England.

Included below is an enlargement of a photo of Lady Curzon in the dress. I am sure she was really happy to have been seated for the photo – weighed down by all that gold!

For more views of the Belle Epoque Peacock Light Switch Plate , and to browse other wall plate choices with exotic back stories visit my Etsy Shop: Serra Craft.

I love images…. and hunting for images online is one of my most enjoyable pastimes.  When I was working on the Art Switchplate: The Art of Prehistory – Altamira Bison shown at left, I found out a lot of interesting info.

In following the backstory of this image I found an interesting note. Found at the site were hollowed bones, with pigment inside the tube of the bone. Historians believe the prehistoric artists filled the hollowed bones with dyes and, by blowing on the bone tube, used this method to spray paint large areas of pigment, like the red area on the bison’s back in the picture!

If you love art, chances are you walls are pretty much filled up. I know mine are. So I began making switchplates that displayed art.  And along the way, not only have I made beautiful miniature functional art pieces for my home and found out some amazing back history on found images used in my creations, but I also grew an artisan business at Serra Craft. The plate shown here is an altered image pattern created from a Kuba Cloth pattern, and embellished with coral and red jasper cabachons.

In this and the following entries, I will share some of my explorations in the studio, and lots of pictures.